COMMENCEMENT CERTIFICATE:
After the approval of the building plan, the owner shall give notice to the authority of the intention to start work on building site in writing. Further, the owner shall give notice to the authority on completion of foundation or footings before erection of walls on the foundation. Within 15 days from the date of receipt of such notice, the Engineering wing/authority shall inspect the site to verify as to whether the foundation work for the building conforms to the sanction plan or not. If the foundation work is according to the sanction plan, the authority will issue commencement certificate within the prescribed period from the date of the inspection. In any case, the construction shall be proceeded according to the sanctioned plan as if the permission for the commencement of the work is deemed to have been accorded.

Further, the authority will verify as to whether the building has been constructed in all respects as per the sanctioned plan of the building, complied with Building bye-laws, including other relevant permissions or clearances obtained from the other departments. If everything is in order, Engineering Department will issue the Commencement certificate.

OCCUPANCY CERTIFICATE:
with respect to issuance of Occupancy Certificate arises on account of violation of Building laws, such is almost 95% of buildings in Bangalore facing the problem. Though common people have spent their hard earned money on the project with a dream of owning a house, they are unable to get the occupancy certificate because of the deviations in construction of the building. Whereas, the Builders having a good connection, escape through various loop holes in law and extended their salable area.

PROCEDURE FOR THE REGISTRATION OF PROPERTY DOCUMENTS

Karnataka Registration Rule No.11 has recognized following languages in districts and sub districts;

However, the registration of documents presented after the expiry of four months is allowed on payment of fine as follows as per Section 5 of Indian Registration Act and Rule No.52 of Karnataka Registration Rules.

MAKE SURE YOU APPROACH THE RIGHT AUTHORITY FOR REGISTRATION

Of late, people are extremely confused about the registration of transfer of properties. The registration process which was a smooth process hither to, all of a sudden has become very tedious calling various documents, approvals, orders, which were not insisted upon earlier. A document that is considered as correct in one Sub-registrar’s office is rejected as not correct in another Sub-registrar’s office.The Revenue department, the Department of the Inspector General of Registration, the Commissioner of Stamps and all the Sub-registrars are confused themselves and seem unable to guide the public.

Apart from conversion of land, the layout should be approved by the concerned authority. Thereafter the building too needs to be approved.Generally, the Urban Development Authority in the district is the approving authority for layouts.

But many layouts are approved by the city municipal councils, town municipal councils, and village panchayats, which have led to low quality development works, causing heavy financial burden on the local boards and the resultant in-convenience to the people.The conversion of land for any purpose other than agricultural should not be in violation of the approved master plan, CDP proposals.As far as Bangalore and surrounding areas are concerned, there are various planning authorities which approve layouts.Each planning authority has a specified jurisdiction.

People should understand that the Bangalore City Corporation (BCC), the various city municipal councils, TMCs or the village panchayats do not have any authority to approve layouts which vest with the Jurisdictional Planning Authorities. Many problems have risen because of the unauthorized and indiscriminate approval of layouts by these authorities, exposing the public to hardships.

Approval of plans
Before we discuss planning authorities, we must understand the powers of various local bodies like the city corporations, municipal councils, TMCs and village panchayats, to approve building plans.

Constructions are permitted only on converted lands and approved layouts.  Village Panchayats may approve building plans with ground plus one structure within their jurisdictional areas only. Gramathana sites have come under strict scrutiny and many Panchayat boards have mindlessly issued Forms 9 and 10 and any approval of building plans on such gramathana sites require extra precaution.  The gramathana sites can be identified by referring to a village map at the Department of Survey and Settlement.

According to a new circular, such sites should be certified by the village accountant enclosing a rough sketch of the gramathana site indicating the exact location in the village map along with its boundaries.

Deemed conversion
As stated earlier, layouts can be formed only on converted lands.The Karnataka High Court, in its Judgment in BDA V/s Vishwa Bharathi House Building Co-operative Society (1992(1) LJ 523B (DB) ILR 1991 KAR 440 (DB) has held that all agricultural lands within the jurisdiction of a city corporation are deemed to be converted.But the Government has clarified that there is no such deemed conversion, but that the competent authority may grant a conversion order.

The office of the BMRDA is located at the LRDE building, Ali Askar Road, Bangalore, and has its jurisdiction on Bangalore urban and rural districts and Malur taluk in the Kolar district, except the areas covered under the BDA, BIAPA and other local planning authorities.BIAPA also has its office at the LRDE building, Ali Askar Road, Opposite to Palace Guttahalli, Bangalore – 52, and has its jurisdiction over the proposed new airport and its environs.  BMICPA has a jurisdiction over the small area of about 65 sq.kms comprising the Bangalore-Mysore Inter Corridor Area.

Other Planning areas referred above have a jurisdiction over respective towns and environs.Planning areas under the BMRDA is very vast, but infrastructure available in the BMRDA is not enough for speedy disposal of approvals, causing much delay. In other cases, not referred above, the respective urban development authorities like the Shimoga Urban Development Authority, the Bellary Urban Development Authority etc., have the jurisdiction to approve the formation of layouts, if the lands are situated in their geographical jurisdiction. There are 27 urban development authorities in the State.

Any development activity has to be approved by these planning authorities as per the provisions of the various laws and the local bodies have no authority to grant such permissions. 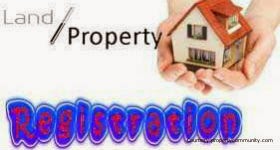 Fees of Registration
Fees charged for the registration or searching the register are prescribed by State Governments through Notifications.

Testamentary instrument
In case of Testamentary instrument, that is, Will, registration is optional and time limit is not prescribed.It can be registered any time before the death of the Testator.How-ever, it is advisable to register the same as soon as possible in order to avoid disputes about the genuineness of its execution. In case of registration of Will, the same may be presented by the Testator during his life time and after his death, by the beneficiary or the administrator, for registration.

A Will may be deposited with the Sub-Registrar in a sealed cover and such deposit may be done through an agent.After the death of the Testator, the sealed envelope will be opened and the contents recorded in the relevant register maintained in the Sub-Registrar's Office.The Original copy of the 'Will' will be in the custody of the Sub-Registrar.

Jurisdictional Sub-Registrar Offices
Generally documents have to be presented for registration only at the Sub-Registrar's office within whose jurisdiction the immovable property is situated. However, in certain exceptional cases, documents may be presented for registration with the Registrar who has been conferred with the power to register the documents. In fact, Sub-Registrars have been vested with the special power to register the document at the residence or office of the executants or to accept deposit of Will.

Presentation of the document
Documents which require mandatory registration have to be presented in the concerned Sub-Registrar Office for registration by the executants or person claiming under the Decree. However, in certain cases, the representatives of the Executants, duly authorized under Power of Attorney, can also execute the same on behalf of the Executants. A power of Attorney holder can execute the document, representing the Principal only if an authority has been vested in him under Power of Attorney, which is authenticated by the Registering authority within whose jurisdiction the Principal resides.If the Principal does not reside in India, then the Power of Attorney should be executed before and authenticated by a Notary Public or any Court, Judge,Magistrate, Indian Consul or Vice-Consul or the Representative of Central Government in that country and the same is required to be presented with the concerned registrar in India with in a period of three months of its receipt in India.When a document has been executed by more than one executants and after execution of the same, one of the executants refrain from attending the concerned Sub-Registrar's Office for registration, then the remaining executants can compel attendance of the executant reluctant to be present before the registering authority through the process of law.

Enquiry by the Registering authority
The Registering Officer is empowered under sec. 34 of the Registration Act to enquire whether or not the person is the same by whom it purports to have been executed such a document.He may insist on production of proof for his identity and in case any person is appearing as a representative or agent, the Registrar may ask for relevant documents to show that the agent or representative has the right to appear on behalf of his principal.

Effect of non-registration
What would be the repercussion if a document which requires compulsory registration  is not registered? Section 49 of Indian Registration Act deals with this situation.It states clearly that such un-registered documents do not convey to the transferee a legally valid title and such documents are not admitted as evidence for any transaction affecting the property referred to in the document. However, there is an exception provided in the Act.The unregistered documents may be admitted as evidence in a suit for specific performance under Specific Relief Act or in any other related transaction, not required to be effected under a registered instrument.

Documents are mainly registered for conservation of evidence, assurance of title, and to help an intending purchaser to know if the title deeds of a particular property have been deposited with any financial institution or person for purpose of obtaining loan or advance against security of the property. Registration of documents acts as notice to the public and to protect oneself against the likely fraud.Therefore, it is advisable to register all documents connected with the immovable property irrespective of whether the registration is compulsory or not as it creates a permanent record of event which are reflected in encumbrance certificates.

Endorsement
After accepting the document for registration, the Registering authority shall endorse the document regarding affixation of the signature of the Executant, payment of consideration, date and other relevant particulars. If registration is declined by either of the party, the same shall be endorsed on the document itself. Apart from this, the Registering authority shall also endorse on the Document the registration number, Book number, pages, volume or CD number and affix the seal of the office of the Sub-Registrar. Such a Certificate shall be copied in the Register meant for the purpose and copy of the map or plan, if any, shall be filed in Book No.1.Thereafter, the registered document will be returned to the person who has presented the same for registration or to his representatives.